Did you just sign up and you’ve been wondering what does the star mean on Tinder? Are you a beginner who doesn’t know much about how Tinder works? Your attention probably would have been caught by the star sign that appears while you’re swiping profiles.

Yes, that star was not always around but it’s the bearer of some good news. The blue star’s presence on someone’s profile indicates that they Super Liked you. It is a feature that allows you and other users to know that they’ve been Super Liked. However, this feature can only be accessed if your Tinder account is upgraded to Tinder Gold or Plus.

When you’re swiping through profiles cards and you stumble across a person’s profile that has a blue star icon on it along with a blue shaded background, then this means that they Super Liked you.

You can give them a Super Like as well by simply swiping their Tinder user profile upwards or clicking on the blue star button.

Table of Contents show
1 What does the star mean on Tinder?
1.1 The point of the Super Like function
1.1.1 Should you buy Super Likes?
1.2 What can a Super Like get you?
2 Wrap Up

What does the star mean on Tinder?

Tinder brings you the best of both worlds, hookups, and dating. Be it Facebook or Twitter, every social media network out there has its specialty. The most common feature that makes the dating app we know as Tinder stand out is the swiping feature that controls much of the matching that occurs on the medium.

You swipe right if you like someone, and you swipe left when they don’t seem to be of your type. Now, these two swipes were the main ones for a long time until Tinder launched its Super Like new feature.

In the beginning, it was not just limited to Gold and Plus users since regular users used to get a shot once a day as well. However, Tinder changed this and now only users with a paid subscription can have Super Likes. 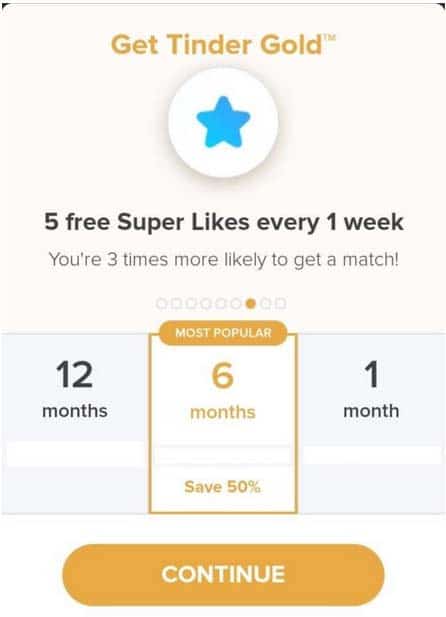 The whole purpose was to add more functionality to Tinder app because quite frankly, the two basic swipes had gotten stale. The Super Like feature has received praise from Tinder users all over the world ever since it was released around six years ago.

Tinder’s own tests have suggested that upward swipes (Super Likes) have resulted in a 70% increase in conversations between users. Not only does this maximize the chances of a match being successful, but it also brings a fresh wave of improved interactions in the world of Tinder.

Should you buy Super Likes?

As mentioned previously, if you did not have a Gold or Platinum Tinder subscription, then you’d only get one Super Like per day.

Such is the case with Tinder boosts as well. Now that Tinder has limited Super Likes to Gold and Platinum users, regular users cannot use Super Likes unless they pay for them.

Although Super Likes increase the probability of a potential match, they are not worth buying at all. Yes, the Super Like feature can be of assistance but we suggest you should take measures to improve your Tinder profile instead of spending money on Super Likes.

Since a fine presentation of yourself can skyrocket your chances of matching with someone, there’s no point in paying for a feature that may or may not get you the results you need.

Initially, the Super Like feature was designed for users who want to show a potential match that they truly stand out from the rest. However, in regards to the use of Super Likes, many users either fail to truly understand how this feature works or benefit from it the most. There’s no line in between. Should you use Super Likes? This question cannot be answered with a straight yes or no. It depends on how you plan on utilizing them. Whether you’re a guy or girl, the biggest pro of this feature is that you can grab the attention of that special someone by super liking them.

However, if they still swipe left on you, then you’re left with nothing except a decreased number of Super Likes while that ‘special someone’ discovers other matches with that blue star you gave them.

At the end of the day, the Tinder Super Like feature can either make your wallet empty or match you with some of the hottest people in your town.

It’s up to you whether you want to test your luck or not.